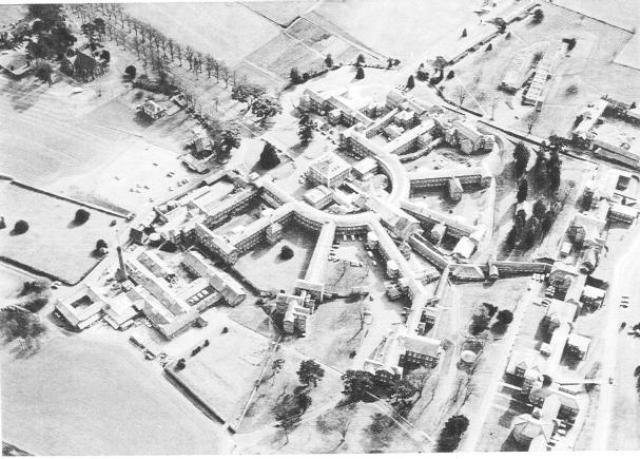 Devington Park was originally built in the mid-1850s as an asylum for the County of Devon.

It was self-contained, with its own farm growing various crops, and raising pigs and cattle for use it its own kitchens.  It had its own laundry and its own water supply that came from a well near Pynes Hill.

The two lodges at the bottom of the drive were the only way in and out of the main hospital, with the gatekeeper logging everybody in and out, making sure the residents were secure and retaining the keys for the site.  Coming up the Avenue, on the right is the Chapel for the estate – now a private school, and the house nearest the top end of the drive was the Administrator’s house.

From the top of The Avenue, the large house to the right in the distance was the nurses’ quarters for the hospital; now it is the Environment Agency’s offices.

Over the years, various improvements were carried out including the hospital’s connection to the main sewers. Before this the effluent just flowed into the fields .

During both World Wars parts of the hospital were used for the wounded, particularly following the evacuation of Dunkirk.

The hospital finally closed in the mid-80’s and the building was left empty for a number of years before becoming derelict.

Work started on its conversion into housing in the late 1990s, with the demolition of all the extensions, taking the building back to its original outline.

The estate buildings are today listed as Grade 2* and have been developed into 118 self-contained apartments and town houses.